Get into the robot’s skin

Every journey begins with the first step.

But not everyone can make it themselves.

For most of us, the ability to move is like breathing - it is obvious, not a benefit. The statistics from 2019 show that in Poland there are 6 million people with disabilities and over 200,000 children (under 15 years of age) have limited ability to move. The chance to improve their mobility and increase their social and professional activity is rehabilitation. If people with physical disabilities have a desire to get up and start exercising, this is a large part of the success. However, modern methods of rehabilitation and the opportunity to take advantage of them are an important part. For this reason, projects for an exoskeleton have begun.

Stay on your feet

Motion disability often leads not only to exclusion from many activities, but also negatively affects other aspects of life - psychological, social, professional, and physiological. Patients after neurological incidents, spinal injuries, people suffering from cerebral palsy, spinal muscular atrophy, multiple sclerosis, or congenital defects need a solution that will show them that the world is open to them too.

In July 2017, a team of DreamMotion physiotherapists and ATMAT engineers started working on a project to help people with disabilities re-educate their gait, both during rehabilitation in medical facilities and everyday activities. The specialists are working on the development and execution of the entire system, which will consist of a mechatronic system, an exoskeleton, a VR/AR system, and additional dedicated tools such as a walker, crutches, or a wheelchair. 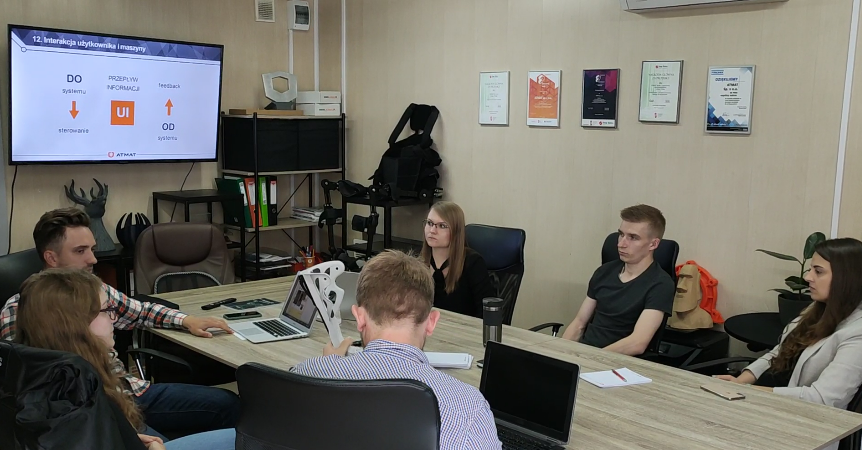 Engineers had to connect modern technologies with the research of physiotherapists, science with the human factor, imagination with reality. The first step of their work consisted in obtaining the construction and development of modules based on which the exoskeleton will be built in the future. The specialists from the ATMAT team also worked on the control system and the development of the foot module, allowing to determine the center of gravity and the distribution of the foot pressure on the ground.

Currently, there are many similar devices available that use 4 to 6 drives and allow the patient to move with the assistance of a walker or balls. We have undertaken to design an exoskeleton that will ensure proper and natural walking. This is possible when the number of degrees of freedom using the drive modules is increased. That is, nothing but free movement not only of the limbs but also of the hips and feet. The movement is then more smooth and natural.

Fot.: Assembling of the model

In the second step of the project, the engineers worked on the development of virtual reality, which in the end version will make the process of rehabilitation for the youngest patients more attractive and will increase motivation to exercise. The use of the virtual and extended reality system allows us to perform activities by playing and exploring the different spaces in the world created by specialists. During this kind of rehabilitation, there is no time for boredom. The project included the preparation of fully functional 3D simulations and detailed mapping of the environment and motion. The biggest challenge was to synchronize the movement of the exoskeleton so that there is no perceived retardation between the movement and the simulation.

The configuration of the exoskeleton will allow both the physiotherapist and the patient to use the telemedical platform. The telemedicine system allows for remote planning and conducting of rehabilitation based on the analysis of transmitted data - the system guarantees the optimal selection of therapy parameters to increase its effectiveness. The original solutions enable conducting rehabilitation under the constant supervision of physiotherapists, both in clinical and home conditions.

We are sure that rehabilitation should provide improvements in each of its four aspects: physiological, psychological, social, and professional. By using telemedicine the patient can intensify his therapy, but also treat the equipment as an integral part of his life. Our target is remotely controlled patient care by numerous medical units. A qualified physiotherapist, from every place with access to the Internet, will have immediate access to the user's results and will be able to make changes, e.g.: walking speed, length of the step, the cycle of additional exercises or strength of support.

Run with the fences...

The mapping of natural, flowing human movement is a big challenge. In the first stages of the project, the ATMAT specialists created two passive versions of the exoskeleton, which allowed them to obtain information on the materials used, the correctness of design, the functionality of individual elements, and the way people are attached to the structure. The prototypes allowed them to develop the best solutions that are also the most comfortable for the patient. The first version of the robot had 4 active and 6 passive degrees of freedom, to later add another two active degrees of freedom. The second active version has 10 active and 3 passive degrees of freedom.

The work of the robot was carried out at the same time on many levels. Not only the exoskeleton was changing, but also the elements of the robot, such as handles and upholstery that fix the device to the patient's body. Much attention was focused on making pellets and a model of the foot, which in subsequent phases of the project were printed in 3D printing technology from different filaments. Additive technology was also used in prototyping selected elements.

Fot.: Steps of the project development

The main concept of the project was the lightness and comfort of the construction, allowing people with motor disabilities to use the exoskeleton at home, without having to adapt the rooms. However, that is not all. The exoskeleton has been designed in two versions - for children and for adults, and its modular construction allows to adapt the device to the patient's height and weight, depending on the needs and stage of development.

The distinctive feature of the project is the possibility to personalize the construction. This is possible due to 3D printing technology. Some elements of the exoskeleton can be adjusted to the body structure of a particular patient and changed if necessary during rehabilitation. Such a solution provides comfort during exercises and daily use of the robot and allows for more activity and more independence. 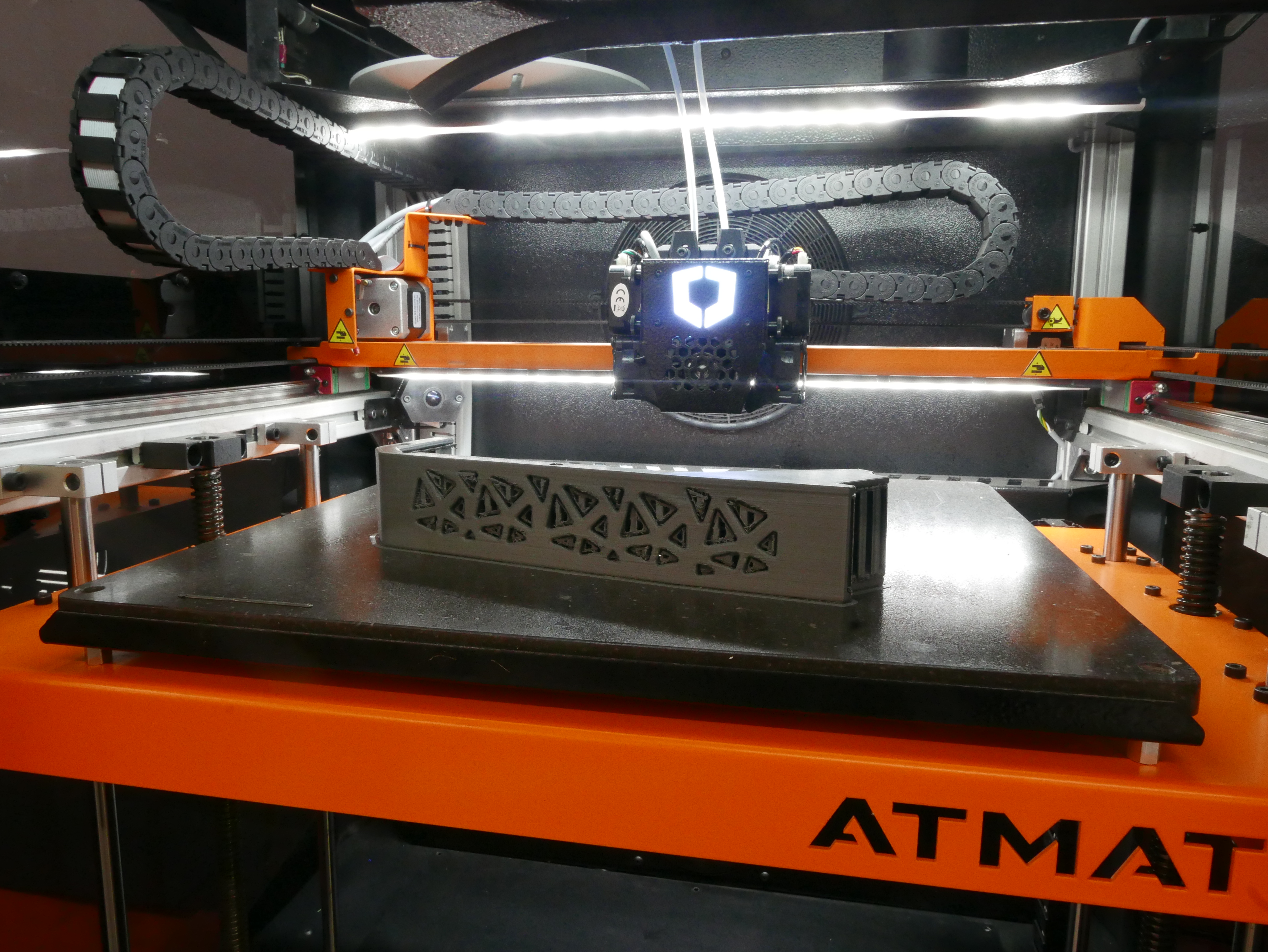 Fot.: Printing of the case for project

...straight to the finish line

The exoskeleton allows the use of a new, multidimensional rehabilitation system. The final version of the robot will consist of a mobile exoskeleton, a stationary unit, accessories supporting balance, a telemedical system, a VR and AR system, and an electric wheelchair. Each of these parts has a different, important application, and when used together, they create a modern ecosystem that will increase the possibilities of current and available rehabilitation practices.

When realizing this type of project, we must remember that rehabilitation is a continuous process that must be approached comprehensively, including conventional methods. Before the patient starts to use the exoskeleton, he or she goes through manual rehabilitation and performs many tests and tasks that prepare him for further stages of work on increasing motor fitness. Each person has to go through their way under the care of a professional physiotherapist. An exoskeleton is a tool that will facilitate the work of each side.

The use of additive technology in the design is a solution that provides comfort to the patient during exercise. This project has been made possible by ATMAT's well-equipped machine facilities and cooperation with an interdisciplinary team. Most of the work could be done by ourselves, and thus we had control over the creation of the exoskeleton at each stage.

The connection of advanced technologies and a variety of functions allows us to work with a wide group of patients with motor disabilities with different degrees of development. The exoskeleton is a different aspect of rehabilitation, which will help to break down barriers - not only physical but above all psychological. The final stage of the project is to obtain the appropriate certification before the exoskeleton is introduced to the general public.